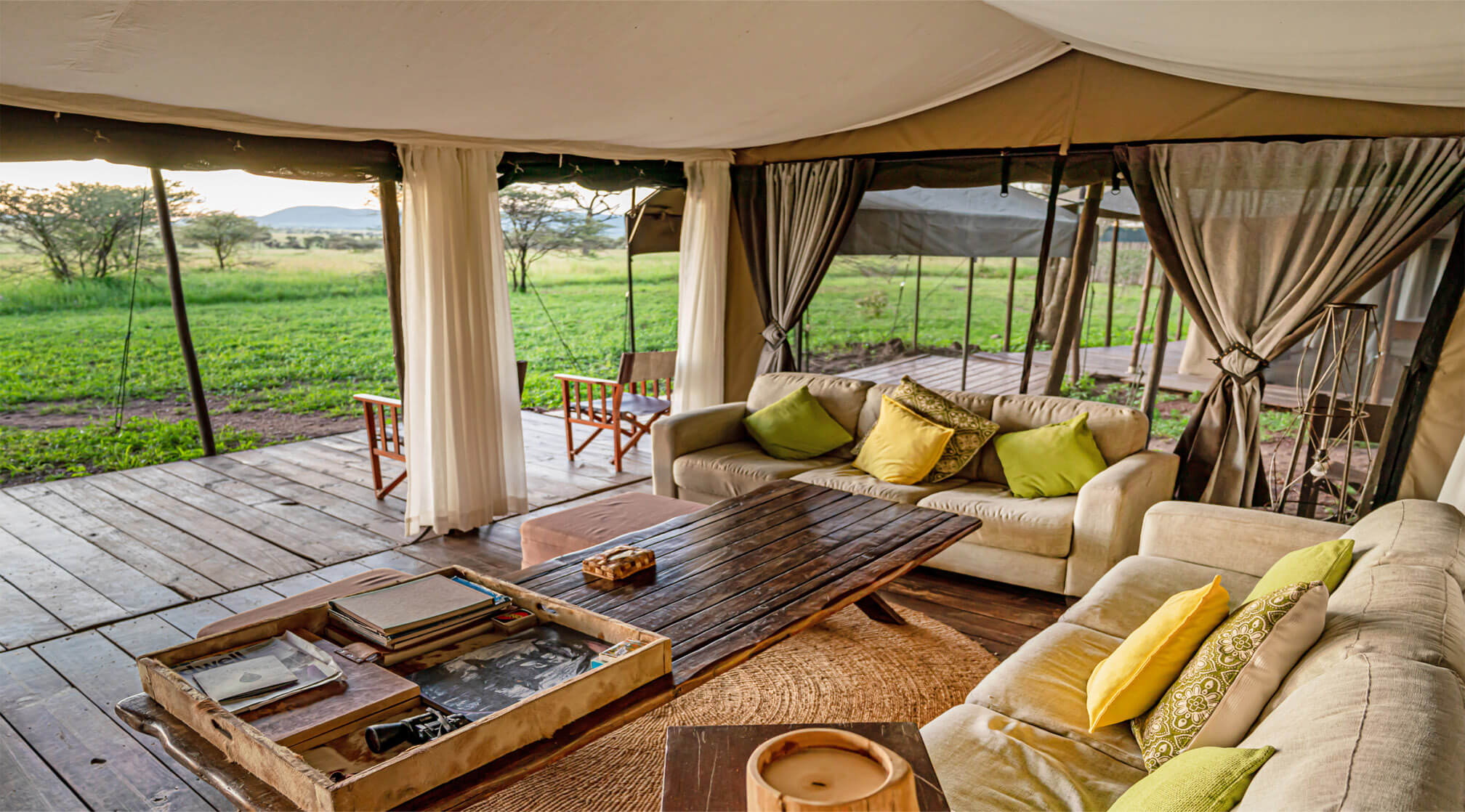 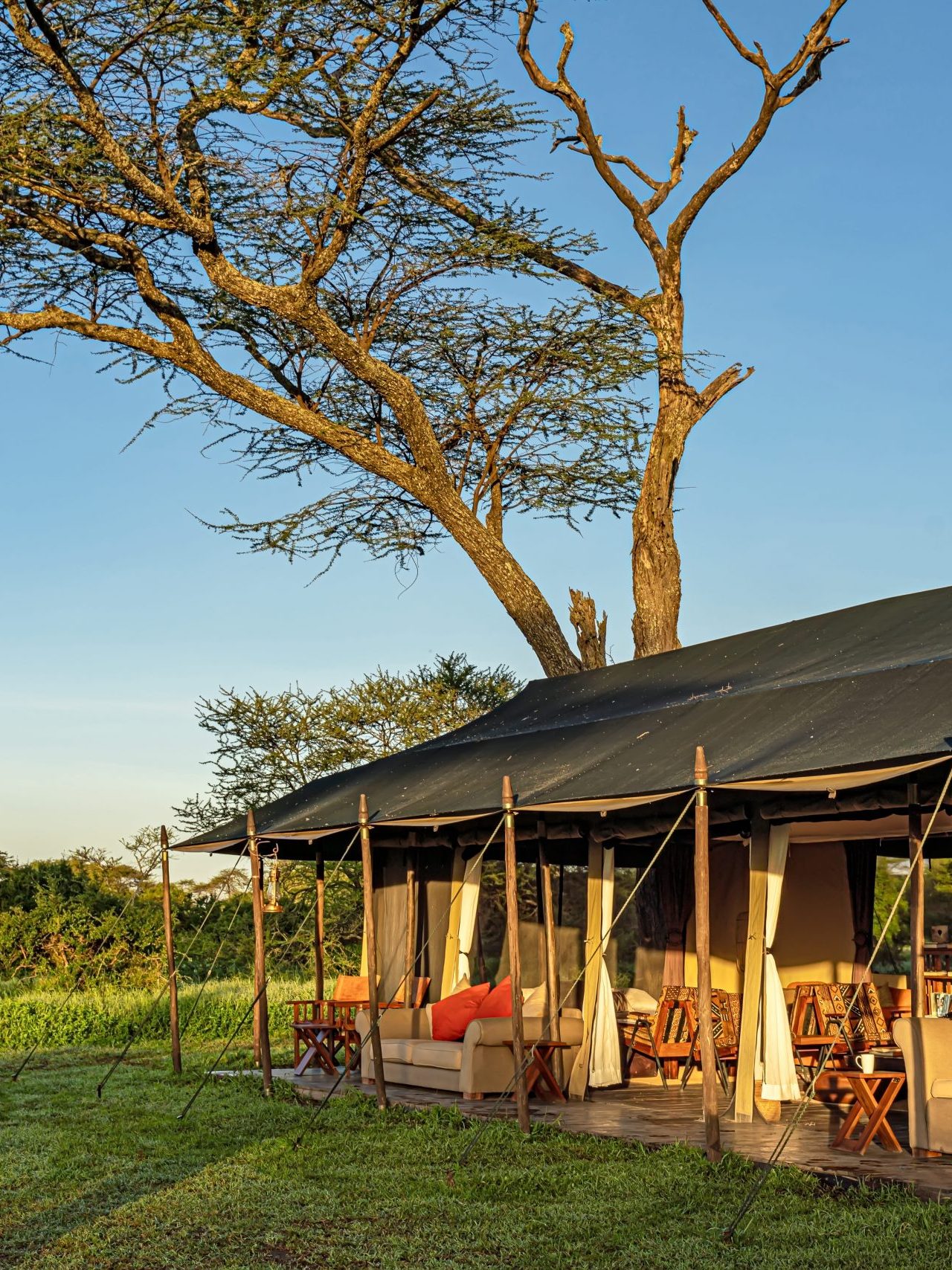 One authentic mobile tented camp, but in two locations, Lemala Ndutu & Lemala Mara moves north and south with the seasons to ensure guests enjoy ringside seats to the spectacle of the magnificent wildebeest migration year-round. Both are set up in sublime locations offering a high-quality safari experience with excellent guiding.

Lemala Ndutu Tented Camp is in the Ndutu region of the Ngorongoro Conservation Area near the border of the Southern Serengeti. This area is classic savannah, characterized by flat grassy plains, and our camp is in one of the finest locations in Ndutu to see the migration between December and March. Tens of thousands of wildebeest, zebra and gazelle usually arrive in December to graze on the newly-watered, highly nutritious short grass plains, and then by February, the main calving season takes place. Predators – especially the big cats – are highly concentrated in the Ndutu area in these months. With 9 tents, Lemala Ndutu is perched on the edge of a permanent marsh and acts as the ultimate amphitheatre to capture the boundless drama that accompanies the migration

The 12 tents of Lemala Mara Tented Camp travel north between June and October to set up under large Euclea trees in one of the best game viewing areas of the Northern Serengeti. The exact location varies from year to year. Sometimes we set up camp close to the Mara River, but are always far enough away to remain discreet and not interrupt wildlife behaviour as the wildebeest mass along the steep banks during their frantic crossing on their way north to the Maasai Mara. Here, in this immense remote wilderness, guests can enjoy fabulous landscapes and terrific game viewing with practically no crowds. Resident wildlife numbers are always high, but nothing compared to the dramatic scenes during the migration as tens of thousands of animals gather to then plunge into the crocodile-infested river. 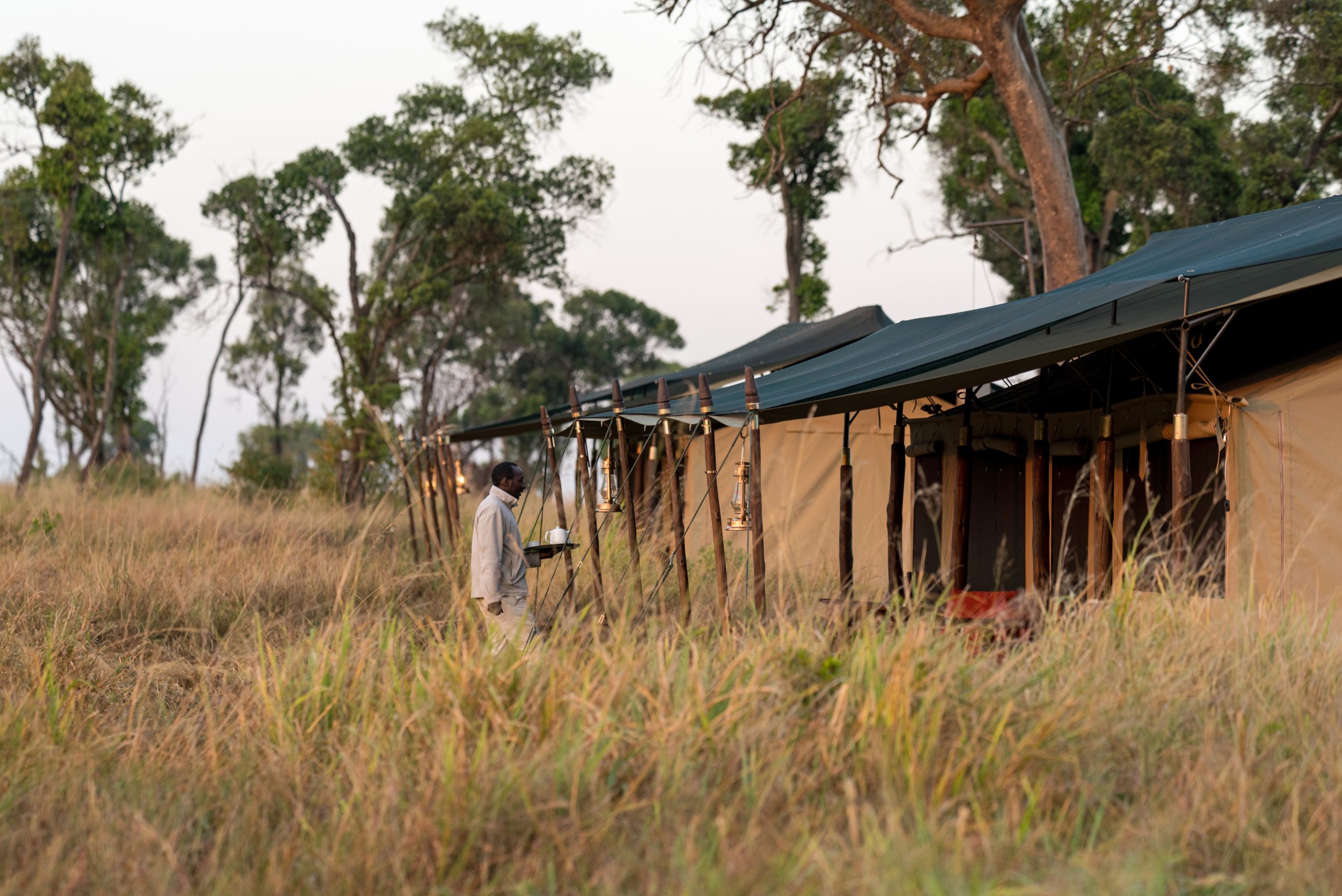 Lemala Mara & Ndutu is a mobile tented camp offering an authentic bush experience, but the tents are spacious and each is furnished with two queen-size beds and all the little luxuries that make them surprisingly comfortable. After an evening game drive, your tent attendant ensures your safari shower is filled with hot water to wash away the dust of the African savannah. Tasty meals are freshly prepared, and the camp organizes great picnic breakfasts and lunches for those who want to go on extended full-day game drives. The communal areas have separate lounge and dining areas and are beautifully decorated with leather sofas, chandeliers, side cabinets, rugs, chests and a bar. In the evening, guests can gather around the campfire to enjoy pre-dinner drinks and canapes and sharing their safari stories.

What to See and Do at Mara & Ndutu Tented Camps 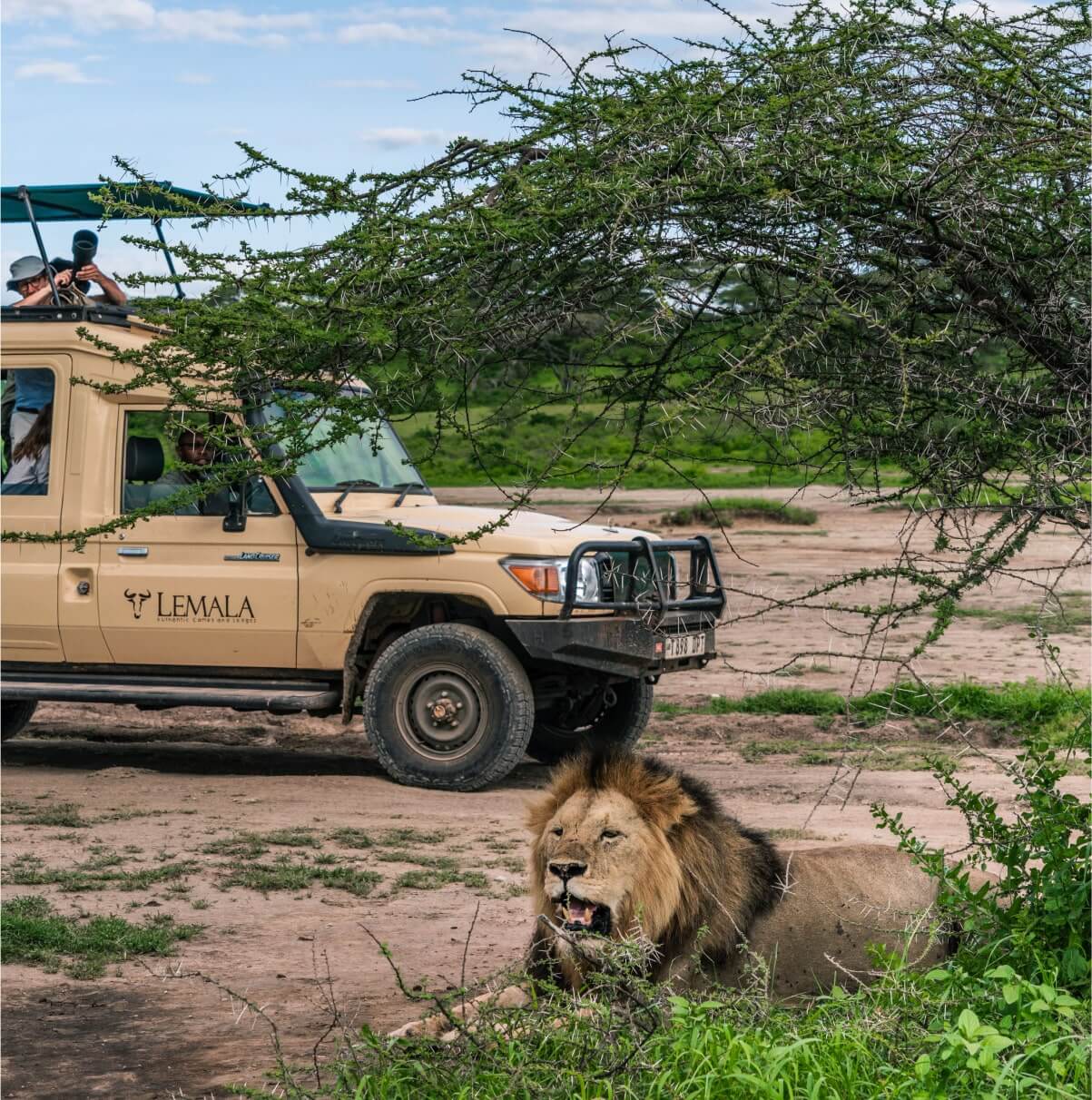 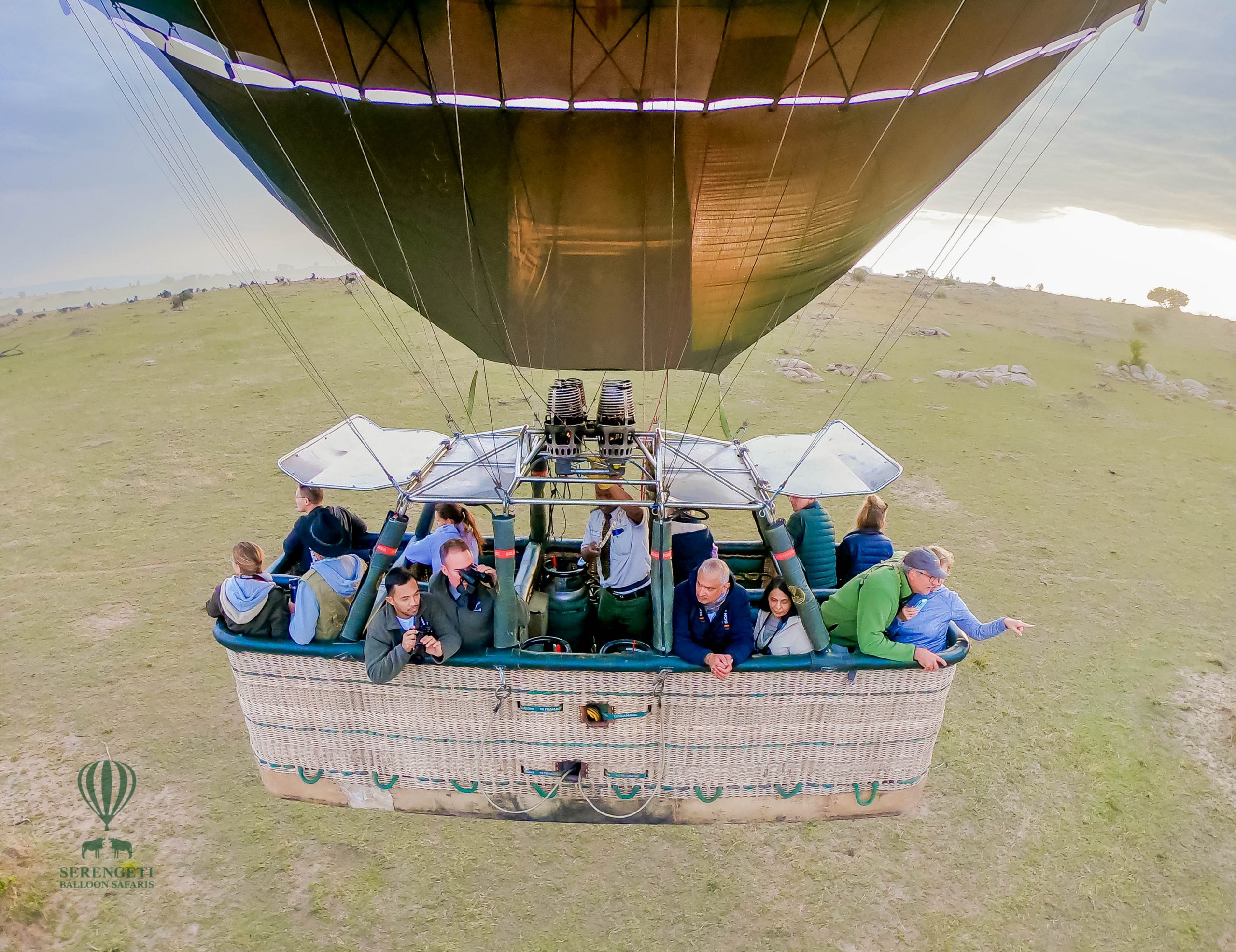 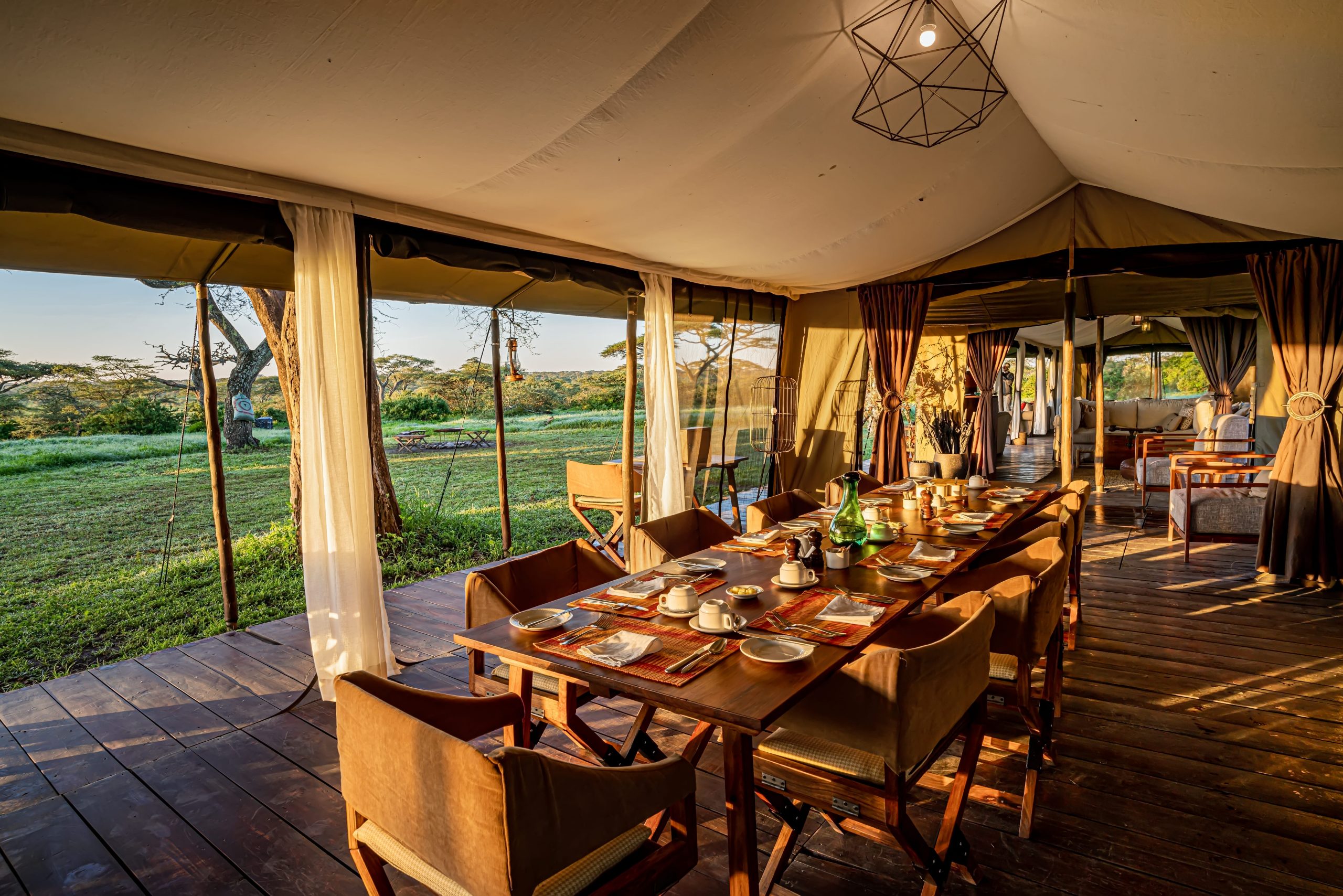 Full Board Rates, Includes and Excludes

Includes
Excludes
From $540 per person sharing per day
Enquire Now

This is one of the most gorgeous places I have ever stayed. Words in a review will not come close to doing it justice. Tarangire Park is a very special place and Mpingo Ridge is the best camp to take advantage of it all. The view from this camp is simply stunning and one of a kind. The rooms are beyond spacious and comfortable. The white and natural decor is perfect for Africa. The highlight of our stay though was the kindness and friendliness of the staff. They were the most accomodating of any hotel I've stayed. They made us feel like family and we were sad to leave!

We were there for a two night stay for my wife's birthday and they helped me pull off the best birthday surprise ever. The room was amazing, the food was amazing and the staff were on point. Juma, the head waiter made sure that we were well taken care of. Talk about value for money, that was it.

The place looks amazing and the staff is really nice, really warm people. If you are looking for a place to connect with nature this is it. It’s the place where you fall asleep to the sounds of the forest. The view from the top is breathtaking. Despite the low temperature, everything is very cozy! Excellent food also! I would visit again!